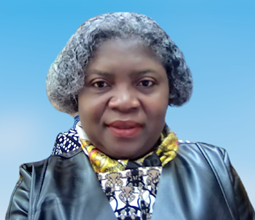 Henriette brings to her United States teaching career, 19 years of professional experience teaching Social Studies and French in Secondary schools in Cameroon, her native country. She holds a master’s degree in Geography Education from the University of Yaoundé- Cameroon and is a Maryland Certified Educator in Elementary k-5, French 7-12, Social Studies 5-12, & School Administration. She is an Advanced Placement French (AP) Trained Teacher and a Trained International Baccalaureate PYP and MYP Educator.

Henriette has been AATF member since 2012, and French Honor Society sponsor at her school since the chapter’s creation in 2013. She is AATF Maryland Chapter Secretary, and MFLA board member.

Her notable achievements include:

Henriette created the SHF at her school in 2013, and since then she has been supporting her SHF members in organizing activities in the school and in the community to promote French language and cultures. She organizes induction ceremonies every year for her students and she sends yearly report to AATF. She attended SHF meeting in Martinique and Philadelphia, virtually for the last two years. She is also active in SHF Facebook page. As an AATF Future Leader, she believes it’s time to take her experience to the national level to support other teachers and help the organization to recruit more SHF members.

As teachers, as citizens, and as human beings, we watched the appalling murder of George Floyd and feel we cannot remain silent.   We share the outrage and anger and stand with those who seek meaningful change and an end to all racism. We join our voice to the voices of those seeking justice, seeking an end to police brutality, and striving for an end to economic and educational inequality.   We strive to make all students in our classrooms feel welcome and supported and to create an environment where we learn from one  another.   As an association, we welcome and serve all teachers.

The AATF is an inclusive association, which seeks to build, value, honor and cultivate diversity. Associations that are diverse in age, race, ethnicity, faith, gender identity, sexual orientation, physical or mental ability, and perspectives are better associations.  To this end, we seek to create a community where educators, from any background, can promote francophone cultures around the world. Please click the link below for more information.

Each year the AATF offers numerous awards, grants, and scholarships to its members.  Click below for more information.

Sponsor National French Week at your school and get your students involved in celebrating the learning of French!

Become an AATF Leader this year!

Five consecutive webinars entitled "Noires Amériques: Conversations littéraires"  have been recorded and are avaialable for viewing.

Denise Mahns has provided us with a review of this series. Click on the link belowe to read her review.

Applications for the The Travel Award are now under review.  The winners of this $2,000 stipend will be announced soon!

Submissions for the SHF Writing Contest are now being reviewed.

The winners will be annouced soon!

The New Francophone Studies Stipend and SHF Writing contest date for submissions has now passed. Congratualtions to all of the recipients!