Do you have a student milestone or a special event that you would like to share? Please send your submissions for review. Please include the name of your school, the event, the date, the name of the student ( if applicable), and any other pertinent information.

Your form message has been successfully sent.

You have entered the following data:

The AATF is pleased to announce that Tyler Yankee of Mexico High School, Mexico, NY has received the 2020-2021 Outstanding Senior in French Award. This award is made annually to a graduating senior who has demonstrated excellence in the study of French as well as exceptional commitment to the French Language and the many cultures where it is spoken. Recipients must have studied French for at least three years at the time of graduation and must be a non-native speaker. Tyler has studied French for six years, beginning his studies in 7th grade at Mexico Middle School. Tyler has been a member of the Mexico Chapter of the SHF for four years and has served as secretary and president. He also received the AATF Excellence in French award his junior year.

Tyler has been an active member of several organizations throughout his high school career. He played JV and Varsity Soccer and served as captain. He was a member of the Math, English and National Honor Societies serving as president for math and vice-president for national. He participated in the OCAY League and was captain of his team. He was a member of the newly formed Student Senate this year and sat on the Board of Education as the student Representative. Tyler also has been a member of Mexico’s Robotics Team which has participated at the National level.

All while being busy at school, Tyler also spent time giving back to the community by working at the Brewerton UMC Food Pantry and at Vacation Bible School. He tutored math students and has been a referee and coach for the Mexico Youth Soccer Organization.

Tyler’s most recent accomplishment was to be the first student to earn the NY State Seal of Biliteracy at Mexico High School. The subject of Tyler’s SSB project was L’Académie Francaise and its role in modern society. Projects completed for the SSB included a poem, a vlog, several interviews, a short story, and presentation, all completed in French. Tyler had the privilege to interview four Francophone speakers from France, German, Switzerland and Quebec as part of his project, which he considered a highlight of his journey to obtain the seal.

Tyler graduates as valedictorian of his class. He is also an Eagle Scout. He is the proud recipient of the Clarkson Ignite Presidential Fellows Scholarship, and the SRC CNY STEM Scholarship. Tyler will attend Clarkson University in the fall where he plans to major in Technical Sciences in hopes of becoming a software developer or data scientist.

Tyler’s favorite part of French class was how it helped him adopt a more global perspective by understanding other culture throughout the extensive Francophone World. Tyler has been instructed by Mme Alyshia Cottet and Mme Kimberley Harter throughout his high school career.

The 2021 AATF of CNY Scholarship Winner is Evan Krukin!

Evan Krukin, a senior AP French student at Fayetteville-Manlius High School, has been selected as the winner of the 2021 AATF of CNY Scholarship for Excellence in the Study of French.  Evan has been the president of Le Cercle français, the high school French Club, for three years.  In 2020, he was elected Treasurer of the Fayetteville-Manlius Chapter of la Société Honoraire de Français.

Evan is an enthusiastic, motivated and determined leader.  His passion for the French language and French-speaking cultures is unrivaled.  His infectious enthusiasm attracts participants across all grade levels to every event, activity and meeting.  This year, Evan’s creativity has been priceless as French Club moved online and overcame the obstacles of the pandemic.

In the classroom, Evan is always an active participant.  He is a risk-taker and an inventive thinker.  He pulls together his classmates into a cohesive group -- AP French is a team effort!  In fact, under Evan’s leadership, the group has been a cohesive unit for several years.

Evan’s talents are not limited to French.  He is an avid videographer and a 2021 Dance Marathon MC.  He is also an actor, singer and dancer in the school’s musical and theater productions.

Next year, Evan will pursue degrees in Communications and French at Syracuse University.  He has been accepted to the prestigious S.I. Newhouse School of Public Communications.  Evan plans to study abroad and to continue his active involvement in French courses and extracurricular activities. 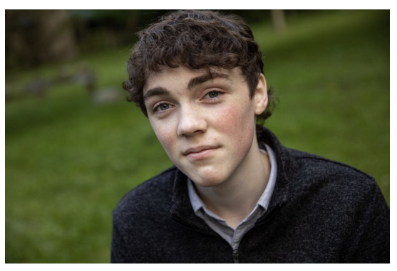 The AATF has announced that Noah Kotzin, a senior at Jamesville-Dewitt High School, has received a 2017 AATF Outstanding Senior in French Award.  This award is made annually to a graduating senior who has demonstrated excellence in the studey of French as well as exceptional commitment to the French language and the many cultures where it is spoken.  Recipients must have completed at least three years of French study at the time of graduation and be non-native speakers of French.

Kotzin has studied French for five years and is the student of Solace Amankwah.  He is a member of the National French Honor Society and has volunteered to help out with French Club activities at JD Middle Schoo.  He is so interested in French that he has a French pen pal with whom he communicates regularly.  He has also read a number of novels in French --  "The Chronicles of Narnia," the Harry Potter series and has watched the Star Wars movies in French. (NOTE:  Noah is shown with his principal Paul Gasparini in the photo above.)